Update: 3/19/2011 - This morning's WSJ continues the "deja-vu" California experience alluded to in the first note provided below.  Although the Orpheum marquee no longer has the words up there I would still like to see "Total Recall".  For perspective use the following as a starting point to inform and remind yourself -

California electricity crisis - for those in a hurry here is the first paragraph:


The California electricity crisis, also known as the Western U.S. Energy Crisis of 20002001 and the Phony Energy Crisis of 2001 was a situation where California had a shortage of electricity caused by market manipulations and illegal shutdowns of pipelines by Texas energy consortiums. The state suffered from multiple large-scale blackouts, one of the state's largest energy companies collapsed, and the economic fall-out greatly harmed GovernorGray Davis's standing.

"Plan for power plants will return" by Ron Seely (WSJ/3/19/2011) provides a good overview of the controversy in Wisconsin - Koch brothers, no-bid, private-vs-public, why spend $9M, who will benefit.  The most important item - purchase of power from private providers (assuming the plants are sold) will be cheaper - is seemingly taken as a given.  Where is the data ... someone should have to prove it ... and beyond any reasonable doubt, and most important how are the savings (if they exist) achieved - pollution, litigation, firing employees, cut backs in staffing, depreciation, tax breaks?

Does anyone recall who was one of the legislators who prevented approval of negotiated union contracts by the Wisconsin legislature?  Guess what his job is now - Administrator of Division of State Facilities and he is in the middle of this controversy.  Jeffrey Plale From Wikipedia, the free encyclopedia quoted from the source!


Jeffrey T. 'Jeff' Plale is a Democratic politician and former member of the Wisconsin Senate, representing the 7th District from 2003 until 2011. He was previously a member of the Wisconsin State Assembly from 1996 through 2003.
He lost his 2010 bid for re-nomination on September 14, 2010 when he was defeated in the Wisconsin Democratic primary election by Chris Larson, a member of the Milwaukee County Board of Supervisors,[1] who contended that Plale was far too conservative.[2] Plale lost by 5,148 (39.3%) to 7,962 (60.7%) for Larson.[3] Larson subsequently won the Senate race, in an election that saw four Democratic seats fall to Republicans.[4]

His biography should be updated - works for Walker!!

I was living and voting in California in 2003, when Gray Davis became the second governor in U.S. history to be recalled.  He was defeated by Arnold Schwarzenegger.

I voted for Davis in the recall since I personally felt the "energy crisis" in California had been manufactured by Enron (now definitely known to be true).  As I recall (and I am going to rely on my impressions) Enron had been allowed to buy or buy into the power plants and power transmission lines.  Guess what ... they started to unexpectedly go offline at awkward times.  Governor Walker's plan to sell state owned power plants sure seemed like a Yogi Berra moment (It's like deja-vu, all over again.) to me.

Walking down State Street today I was reminded of my fleeting thought ... 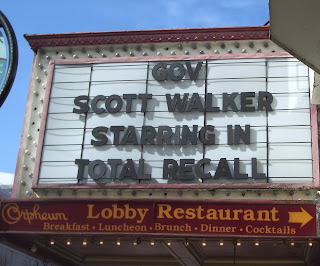 How ironic ... I liked the movie ... a good plot with Arnold doing ok acting!  The evil people are as usual the big, greedy, unprincipled corporations.  Is Wisconsin going to swig a Koch the California way!  I think the Orpheum Theater should definitely reprise the film!!! I will have their Sunday Brunch and then watch the show. Picture 3/15/2011 @wmagates on Twitter.