NPR: Invisibilia: Flip The Script > Dealing With Hostility, Anger, Confrontation - The Opposite

Psychology has a golden rule: If I am warm, you are usually warm. If I am hostile, you are too. But what happens if you flip the script and meet hostility with warmth? It's called "non-complementary behavior" — a mouthful, but a powerful concept, and very hard to execute. Alix and Hanna examine three attempts to pull it off: during a robbery, a terrorism crisis and a dating dry spell.

The story is multi-part ... robber, radicalization, dating and finally the science.  It reminded me very much of my work in software consulting where I was always going into a "hostile" environment where it was perceived that the company I worked for was responsible for "the problem".

In our political environment today it has become standard behavior to be "hostile" no matter what. This presents a very problematic situation.   I always viewed my task as trying to find ways for the groups involved to "save face".  It usually worked.  The failures usually resulted from "major coverups" where one group really knew they had botched it.  Even then "saving face" for them was sometimes possible ... blame it on other related external factors. 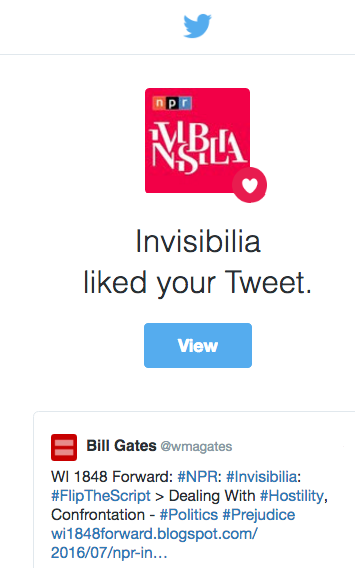 As Brain Pickings points out, Pascal set out the most effective way to get someone to change their mind, centuries before experimental psychologists began to formally study persuasion: ...

People are generally better persuaded by the reasons which they have themselves discovered than by those which have come into the mind of others.

Posted by Bill Gates at 2:35 PM No comments:

THE DEBATE - Round One:

Fact Check: Trump And Clinton Debate For The First Time

For two straight days, they asked Trump question after question that touched on the same theme: Trump’s honesty.
The lawyers confronted the mogul with his past statements — and with his company’s internal documents, which often showed those statements had been incorrect or invented. The lawyers were relentless. Trump, the bigger-than-life mogul, was vulnerable — cornered, out-prepared and under oath.

Thirty times, they caught him. ...


My opponent asks her supporters to recite a three-word loyalty pledge. It reads: "I'm With Her". I choose to recite a different pledge.

["I'm With Her" started out as a hashtag and sometimes supporters do chant it at events, but the Clinton campaign doesn't ask supporters to pledge loyalty by reciting it. The campaign's current slogan is "Stronger Together." — Tamara Keith]


AND NOW "The Donald" on IMMIGRATION

In general "boards" are probably a good way to stop swerving all over the highway.  When a policy making politician (Walker) serves a longtime they end up appointing all the members.  This is all well and good so long as the public really is involved in electing that politician.  If you bias the process by voter suppression (intimidation, id requirements, moving polling places, changing registration requirements, making registration expensive) or vote gerrymandering it is an insidious corruption ... pure and simple.

SCOTUS is like a board and it's current makeup a little bit questionable.  Let's hope they can change the vote manipulation process and determine a way to prevent all these forms of corruption.  Validating "efficiency gap" would at least be a start.

VOX: The research that convinced SCOTUS to take the Wisconsin gerrymandering case, explained

Self-Insurance will hurt all Wisconsinites!


The new report, by staff at the state Department of Employee Trust Funds, will be presented Wednesday to the Group Insurance Board, which oversees the $1.4 billion health benefits program for 250,000 state and local government workers and their family members.
The board is expected to discuss bids from companies seeking to participate in a self-insurance program in closed session Wednesday and act on the matter publicly Dec. 13. A move to self-insurance would then go before the state Legislature’s Joint Finance Committee.


... But Phil Dougherty, senior executive officer of the Wisconsin Association of Health Plans, which represents 12 of the 17 HMOs involved in the current program, said the bid process won’t evaluate other important factors.

... “There are serious considerations outside the scope of the (request for proposal) process that must be explored — real consequences, ranging from elimination of choice for consumers and greater financial risk for taxpayers to market instability and higher costs for other health care purchasers and local communities,” Dougherty said in a statement.
If the Group Insurance Board adopts self-insurance, the state legislature’s Joint Finance Committee would have oversight of any contract.


This will at first opportunity be used to cut health benefits.  It will have the rollover effect of diminishing health benefits for everyone in the state.

I suggest you contact members of the Group Insurance Board, the Joint Finance Committee and your Legislative representatives.


Do you think JFC can save "retirees"? Walker in charge: How to mess up Healthcare even more

WI 1848 Forward #GroupHealthBoard > #Walker Dynasty cronies to work #NoFingerPrintsWalker. Consequence and Impact of #efficiencyGap #GerryMandering ... and of course the #GOP, having lost, want to cling to the politics of resentment and minority rule.

Will take Gov. #Evers sometime to fix ! -- WI 1848 Forward #GroupHealthBoard > cronies to work on #healthcare - The problem with too long and too many terms! #NoFingerPrintsWalker divide & conquer scheme on #healthcare ... also Employee Trust Funds
Posted by Bill Gates at 5:12 PM No comments:

What's wrong about excusing or just passing it off as accidental ????

The humor is that given Trump criticism of Obama and Clinton if seems Melania is more aligned with Democratic values than those espoused by "The Donald".

Net Migration Patterns for US Counties - Over The Decades

Sort of concludes we are between a rock and a hard place ... think Walker/GOP will act with correct policies ?

I can't prove it but I can suspect it (with enough time and effort I think I could prove it) ... rural communities vote for politicians, such as Walker, who promise tax cuts and in truth they probably deliver.  However, the tax cuts do not even fall proportionately on the population but instead go to "wealthy" via property tax reductions and the "high income" since the "rural" or "low income" are seldom targeted to benefit.

The politicians count on most voting citizens to know nothing about the benefit or the cost distribution or the local government (schools, etc.) or personal or corporate incidence of tax policy.

the "real" reason for rural perception of "Politics of Resentment" and why won't the kid come back?

as Governor and GOP Legislature fail to address rural loss of capacity to create, develop and maintain infrastructure ... especially schools and post-secondary education.


Since the Great Recession, more people have been migrating out of Wisconsin than moving into the state — a pattern contrary to Minnesota and Iowa.
All three states had a net gain of people moving into them through 2009, the last official year of the recession, but since 2010 Wisconsin has had more people move out than in since 2010, said David Egan-Robertson, a demographer with the University of Wisconsin Applied Population Laboratory. Iowa has had positive annual net migration in all years, while Minnesota's pattern was negative only in 2010. In 2011, Minnesota started posting the largest gains of all three states.
Egan-Robertson discussed Wisconsin migration patterns in a November 12, 2015, talk given at the Cooperative Extension State Conference. His presentation, "Population Changes in Wisconsin since the Recession," was recorded for Wisconsin Public Television's University Place.
Among Wisconsin's counties, the number losing population has increased since 2004, with 42 of the 72 dropping in 2012, compared to 13 in 2002. "[W]e've been hovering sort of in the more or less half gain, half loss situation since the Great Recession," Egan-Robertson said.

I don't doubt plenty of people have trouble, especially in rural areas, paying their property tax bill.  That is a problem the "Homestead Tax Credit" was designed to alleviate in Wisconsin - does it need expansion?  Many rural areas also lack social infrastructure as well as physical infrastructure.

Why would a family with children want to move to or live in a place with no schools and little immediate access to health care.  Why would a retired person want to live there either - they may be stuck and getting to a doctor is really a major problem?  Why would someone growing up there, spending most of their time being bused to school, want to stay there when they can't get a job later; when they can go to a larger community get a job, meet other people their age, and have more of a social life?

Wisconsin Self-Insurance is likely to decimate healthcare alternatives for all citizens in rural areas.

The Atlantic (3/17): Red State, Blue City The United States is coming to resemble two countries, one rural and one urban. What happens when they go to war?

But if liberal advocates are clinging to the hope that federalism will allow them to create progressive havens, they’re overlooking a big problem: Power may be decentralized in the American system, but it devolves to the state, not the city. Recent events in red states where cities are pockets of liberalism are instructive, and cautionary. Over the past few years, city governments and state legislatures have fought each other in a series of battles involving preemption, the principle that state law trumps local regulation, just as federal law supersedes state law. It hasn’t gone well for the city dwellers.

Study: Wisconsin is 10th most moved-from state in 2017

Posted by Bill Gates at 2:25 PM No comments:

"NOT Your Average Granny" hears about Trump

Trump supporter tells a friend of "Not Your Average Granny" how to solve immigrant problem.


"NOT Your Average #Granny" hears about #Trump #Immigration by Tori #Huggins

"NOT Your Average #Granny" hears about #Trump -  #Political #Humor
Posted by Bill Gates at 2:07 PM No comments: