6/21/13 - Deja vu with failure of House to pass "Farm Bill"--- almost 6 months ago ... and still nothing really done except that GOP wants to starve more people/kids (SNAP) while handing out large subsidies to "large corporate" farms!

Where is Governor Walker's voice let alone his head.  Let's have some leadership given all that national clout he supposedly has.  Does he really care about the "rural/rich" minority coalition that elected him?  Maybe the latter but not the former (the ruralies)?

The buzz about the Farm Bill lapsing seems to suggest that dairy prices for milk and cheese could sky rocket.  Explore the things that may follow!

In essence a market and way of life is altered and/or destroyed and will never be back.  Agricultural policy may need to change but doing it abruptly will be disastrous.  Wisconsin with its smaller dairy herds will never be the same.

An Evolutionary Whodunit: How Did Humans Develop Lactose Tolerance? by Helen Thompson December 28, 2012 9:56 AM

Posted by Bill Gates at 7:30 AM No comments:

As I read the article below I realized that the GOP social policies would eventually self-correct and even faster than first thought.


...Social Security and Medicare enable millions of older Americans to survive financially each month, after years of working hard and paying taxes to earn these protections. Last year, 478,397 Oklahomans 65 and older received Social Security and 485,351 were enrolled in Medicare....

... As lawmakers consider the U.S. budget, here are a couple numbers they should keep in mind: Half of America's seniors get by on less than $20,000 a year. And here's another: Typical seniors already spend nearly 20 percent of their incomes on health care, a percentage that continues to rise.


I may be guilty of relying on an impression of what has been said rather than going back and finding a reference for each impression I ask you just go forward (and verify later, just pretend it is cable news) -

Effects:
Do you think anyone thinks this way ?   If it happens it is sad.

Obama vs Boehner and Military Cuts vs Humanity

Why does in this ongoing "noise" the discussion seem to be for resolving the "problem" by casting a tradeoff off between killing seniors off quicker and reducing Medicare versus raising taxes on the "high income" (which does not mean the "wealthy").

Would not a much broader discussion make more sense.  Reduce our military expenditures on weapons development (that the military does not want but congress(wo)men do), foreign interventions and other adventures to "subsidize" our corporate influence abroad. These would solve many problems and reflect a country that really cares about not just our citizens and children but people everywhere.

The real fun thing about living in a state like Wisconsin ... the people!

Click the "Watch on Vimeo" and you can see it ... really worth it!


Getting Schneider from Nicole Richmond on Vimeo.
Posted by Bill Gates at 9:24 PM No comments:

Rachael Maddow (MSNBC) held up Wisconsin tonight (12/12/12) as having the best system (GAB - Government Accountability Board) in the nation for running and monitoring elections.

Why would Fitzgerald and Walker want to change it?? DUH!!!

I guess there were about 300,000 more Democrat than Republican votes in 2012 Presidential election (in WI).  Yet we have a "Republican Legislature" - it seems Walker and friends have already perfected "gerrymandering" following the 2010 U.S. Census!

Why would Walker be willing to allocate electoral college electors differently?

Voting residency requirement is now 28 days, instead of 10

Email ThisBlogThis!Share to TwitterShare to FacebookShare to Pinterest
Labels: vote

Trump proposes 20% tax on Mexican imports to pay for "his wall".

If this actually gets done a lot of pain will be experienced in the U.S. - cars, other goods and especially "food/produce" will cost a lot more.
_______________________________
From 2012:
We cannot let the GOP define the language of this "fiscal cliff" debate.  The debate is about jobs and economic recovery and a safety net for all of us when the 1% screw things up and try to make us pay for their mistakes.  Boehner, Cantor, Ryan, et al,  just want to protect the 1%.  The people who raid pension funds (like Romney and BAIN Capital) do not care about other peoples jobs.  There are dozen of ways to protect and enhance Social Security, Medicare and Medicaid and create jobs.

One could remove the upper income limit on SS (FICA) withholding.  Oh! You didn't know FICA was capped for some aspects.

One could could treat all income the same no matter the source (i.e., treat capital gains like wages, already done to IRAs, 401Ks for the not so wealthy).

One could make FICA withholding progressive, ability to pay.  Those with really very little discretionary (meaning you can barely get along) income pay less.

President Obama is promoting efficiency in our healthcare system.  We all pay too much for pharmaceuticals.  Why does the GOP block Veterans Administration style purchasing power.  These industries/businesses are subsidized by Federal research projects (National Institute of Health) and then make huge markups on drugs they never could have discovered if it were not for projects like the "Human Genome".

One could cut military interventions and subsidies to out-sourcing quasi-military contractors.

Is it compliance with "administrative rules" or intimidation and piling on ... support Solidarity Singers!

From their story ... McCarthyism Is Alive and Well at Wisconsin Capitol He’s making a list and checking it twice, gonna find out who’s naughty or nice….

The Holidays are here, and Capitol police officers are invoking the spirit of Senator Joe McCarthy by compiling a list of regular attendees of the Solidarity Sing Along, the weekday noon hour singing protest at the Wisconsin Capitol. Police appear to be checking names off on a spreadsheet that lists certain regular visitors to the Capitol, many of whom have received citations during the Capitol Crackdown that began after the arrival of new Capitol Police Chief David Erwin last summer.

A-F of the alphabetized list of citizens that regularly attend the Solidarity SingAlong
“McCarthyism” is the term that describes the hunt for Communists in the United States in the 1950s, and it appears to be alive and well in Wisconsin several decades later, as citizens who sing at the Capitol over the noon hour are targeted, identified, watched and documented.

Email ThisBlogThis!Share to TwitterShare to FacebookShare to Pinterest
Labels: politics 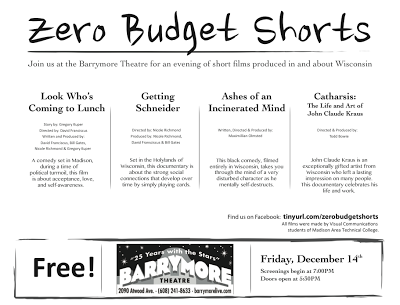 Look Who's Coming To Lunch

The Event
Posted by Bill Gates at 5:11 PM No comments: