FOXConn - Is It A Financial Con ? What does LFB say - Legislative Fiscal Bureau

"Trump and Walker are grifters." So are they the suckers on Foxconn? Or do they think we are?

"Trump and Walker are grifters." So are they the suckers on Foxconn? Or do they think we are?

While Scott Walker and Donald Trump had their press event last week at the site of the Foxconn factory in the SE corner of Wisconsin, we found out that what was being made at the factory wasn't what was promised when the Fox-con was passed into law less than a year ago. In particular, the large screens that Foxconn and Wisconsin GOP claimed would be made at the facility isn't going to be so large.

9/17/2017 ... Lets be sure to keep Walker and GOP accountable:  0 jobs and counting plus taxes given to corporations and other impositions on environment


Waving all kinds of safeguards shifts external costs to those proverbial "grandchildren". What will cleanup or even current hazards cost.

The fact that this has to be "fast-tracked" in the legislature means the deal is really not done.  So let's change it and really analyze costs short and long and see how the "grandchildren" are really going to do!  Is the LFB going to really be able to do their job.

BTW - How does Walker and this help the imbalance faced by rural counties?  Last time I checked Kenosha-Racine counties were semi-urban


Gee, with all of the environmental damage and the massive write-offs and costs that your property taxes will make up the difference for, wouldn’t it be swell to live in the communities around this development over the next few years? UGH!


Can you believe the Ernst & Young study?

I'm a little skeptical ... this might better be called a"Public Relations" promo piece.  You would think FOXCONN would know their "own facts" ... why does Ernst & Young have to tell them to all of us, including FOXCONN.  It still does not include what is being promised to them and what "skin" they have in the game!

By the numbers: Economic impact study of Wisconsin's Foxconn deal

Foxconn's proposed LCD manufacturing complex in Wisconsin will need a great deal of water to operate — millions of gallons per day — and the Taiwan-based company has positioned itself to get it from Lake Michigan. It's likely that Foxconn planners thought ahead about the complex legal structure governing municipal use of Great Lakes water. Once the company can legally access this water, it has to actually get it to and from the complex. That infrastructure will be a major engineering and construction project in its own right. ...

Put this on your timeline ... 2020 or 2022 before even begins to operate significantly

Waukesha anticipates beginning construction in 2019 and completing it by about 2022. The project even has its own public-relations campaign dubbed the Great Water Alliance.

Foxconn hasn't said exactly how much water it will need for a factory in Mount Pleasant. But one electronics manufacturing analyst estimated that it could be as much as 15 million gallons per day — almost double what Waukesha proposes to use at its thirstiest. If Foxconn's needs are anywhere close to that figure, it will take capacious pipes and a fair amount of energy to pump all that water.

Posted by Bill Gates at 7:59 AM No comments:

Senator McCain ... a walking, talking pre-existing condition, deserves every health benefit he has ... we deserve them too!

Is that clear enough!

Too bad, 12/2/2017 GOP Tax Bill, he appears to have abandoned, "regular order" and Medicare and Medicaid, ACA for others.

Pence / Kobach Voting Commission to Build List of "Enemies" :) Trump ... it will be HUGE #VoterSuppression

Anytime huge lists are created you need to wonder and worry about ... "What for!"  I once found out that my name appeared at least 23 times in United Airlines "Frequent Flyer" list, and we were all different individuals by United's criteria.  It is easy to use them as unsubstantiated evidence for blocking you or inconveniencing you because you are on the list ... and have been marked as suspicious. Homeland Security did (probably still does) this kind of thing with no-fly lists.

There is frequently no review and no accountability of someone who may have the authority to "mark" you as "detain and interview".

When you cross this with data from the U.S. Census and/or the IRS ... data which is suppose to be confidential ... it is ripe for abuse.  Potential intimidation by radical GOP directed bureaucrats should make libertarians, conservatives and those most interested in preserving individual and collective freedoms cringe.

The Real Purpose: Voter Suppression - it worked so well for the GOP in 2016


WAPO: Trump’s voting commission asked states to hand over election data. Some are pushing back.

...  “This entire commission is based on the specious and false notion that there was widespread voter fraud last November,” Virginia Gov. Terry McAuliffe (D) said in a statement. “At best this commission was set up as a pretext to validate Donald Trump’s alternative election facts, and at worst is a tool to commit large-scale voter suppression.”

California, a state Trump singled out for “serious voter fraud,” also refused to participate. Alex Padilla, the California secretary of state, said providing data “would only serve to legitimize the false and already debunked claims of massive voter fraud.” ...

Vice President Pence, who is chairman of the commission, hosted a conference call with the group’s members Wednesday morning, three weeks before they are scheduled to have their first meeting in Washington. During the call, Kansas Secretary of State Kris Kobach (R), the vice chairman, told the other members about the letters.

A spokesman for Pence defended the letters, noting they seek information that is available publicly under state laws. ...

... “It looks like they’re putting together a database of who people voted for,” said Jason Kander, a former Missouri secretary of state who runs the nonprofit group Let America Vote. “Democrat, Republican, independent, everybody should be outraged by that. This is from the same people, from Kris Kobach to Donald Trump, who’ve tried to make it harder for people to vote, and this seems like a step in the process. If the Obama administration had asked for this, Kris Kobach would be holding a press conference outside the Capitol to denounce it.”...

... Other states have said that they do plan to hand over information, albeit less than the broad sweep outlined in the letters. Wisconsin’s elections commission administrator said that the state would give the public information for the standard $12,500 fee, but was not allowed to release other details such as dates of birth. Ohio Secretary of State Jon A. Husted, a Republican, said his state would be handing over most of the requested information — noting that it is publicly available — though he said they would not provide portions of Social Security numbers and driver’s license numbers because those are not.

Husted said in an interview Friday that his office had conducted reviews after previous elections, saying that these investigations have determined that “voter fraud exists, it’s rare and we hold people accountable when we catch them.”

Earlier this year, Husted announced that his office found 82 noncitizens of the United States who illegally voted in a recent Ohio election. According to his office, more than 5.6 million people cast ballots in last November’s general election.


The following direct twitter message was sent to me 9/28/2017 ... I'm not sure which of my posts it related to because I have quite a few where the phrase "voter suppression" is used.  There may be a more appropriate place to include this information.  If you disagree with me or this individual do not harass us but do present your facts. 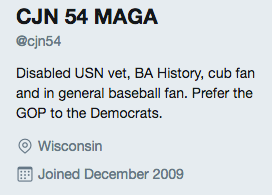 Posted by Bill Gates at 4:30 PM No comments: