Fredy Peccerelli: A forensic anthropologist who brings closure for the “disappeared"

RIOS MONTT CONVICTED OF GENOCIDE AND CRIMES AGAINST HUMANITY: THE SENTENCE AND ITS AFTERMATH

The Amnesty International Document link - the transcripts taken from witnesses begins 10 pages in!  You can read, if you have the stomach, about the descriptions of the murders of over 1700 people.

~~~~~~~~~~~~~~~~~~~
Thirty-one years ago in a small Central American country a military leader took over from a civilian government in a coup.  Regardless of the event the prior government, the new military control and the next government - none would really be legitimate in the context "democracy".

This individual and his cohort was just willing to do some more horrible things to select groups in Guatemala than his predecessors or his successors.

Violence has long been the mutual means of dealing with conflicting interests.  This still seems to be the case today.

Why do I say the "Trial of the Century"?  Perhaps because there has been a peaceful and enduring attempt by so many groups in the world to bring accountability to the "Genocide and Massacres" that happened in 1982-1983.

The "press" focus seems to be on whether the trial will go on or be preempted on a convenient pretext.

The "focus" should be on "genocide and massacre".  Another century of the latter may be the result if our focus is lost.  If the result is instead accountability and a complete trial then something significant has really happened. 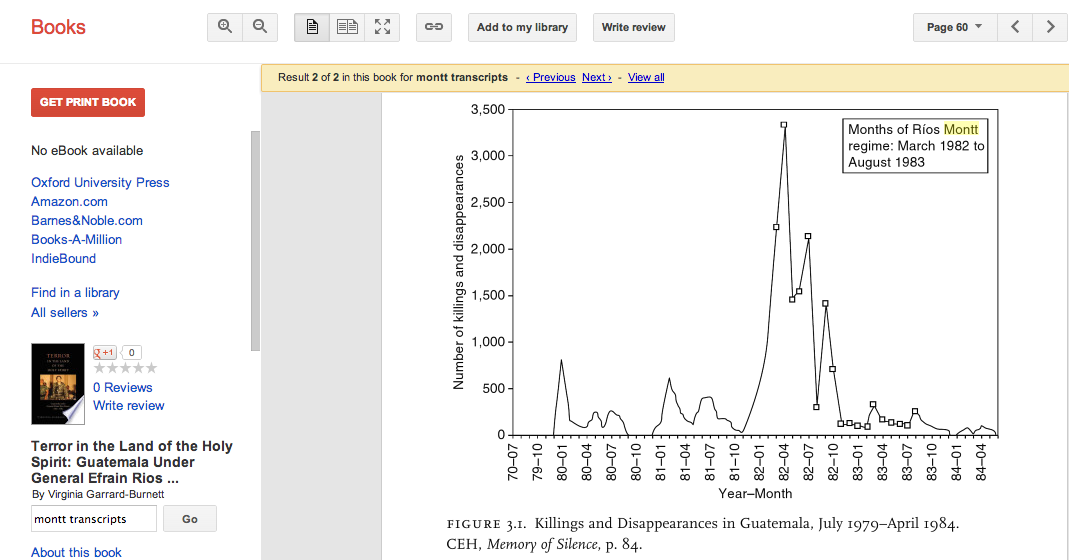 Examples of Atrocity - can you believe it?  Are you aware of it?  What can you do about this?

Canil hid behind a tree trunk and peeked out once he heard no more gunfire. He says he saw that his mother had been struck in the face by a bullet. She had fallen with his eight-month-old sister in her arms. He watched from his hiding place as a soldier came, picked up the crying baby and cut her open with his knife.

The above appears in The Christian Science Monitor published online 2013.04.21.  This is how the article is titled -


Guatemalan who helped build genocide case against ex-dictator was survivor, too

... Beginning in July, 1982, the Army descended on the Ixil region, indiscriminately burning houses, murdering men, women, and children, destroying fields, and killing livestock. Refugees who fled into the mountains were bombed and strafed by helicopters and planes. In the end, between seventy and ninety per cent of the Ixil villages were destroyed. Ríos Montt and Rodríguez Sánchez are specifically charged with fifteen massacres in which eleven hundred and seventy-one Ixils were killed and twenty-nine thousand Ixils forcibly displaced. There are also rape and torture charges. ...

I am living in the wrong city. Wish I was in Guate. Indigenous occupying Congress of Guatemala demanding an end to the siege that began after a protest against a Canadian mining company last week. Check out @xeni on Twitter for more info: “They haven’t captured a single narco. They have only captured peaceful protesters against exploitation of our earth.” Here are some image from last week as well. My friend said they are the same images that were seen during the war:http://www.mimundo.org/2013/05/03/2013-05-02-tahoes-san-rafael-mine-conflict-leads-to-state-of-siege/   .... Cristalyne Bell, 2013.05.07

The Constitutional Court may have vacated Efraín Ríos Montt’s conviction, but the struggle for justice will continue. And nothing can annul the survivors’ testimony and courage.
Read more: http://www.thenation.com/article/174488/guatemalas-genocide-trial#ixzz2U9r4IIqQ

I should begin by saying that as a child (probably 7th or 8th grade) I wondered why as a democracy the USA supported all these dictators and seemingly brutal governments in Latin and South America.  As a child my attention span was developing but there were many competing interests.  As an emerging adult I again have to say that my attention was largely diverted by the War in Vietnam and events here in Madison.

Again and again the documentation seems to suggest that intentional or unintentional acts and policies pursued by the USA has not had a "democratizing" or even benign impact on Latin and South America.  I have included what is publicly available but in all cases been able myself to see each video/film completely.

Much of what has awakened me has come in visual form.  I thought I would share the experience.  It will take you some time.  The experience is living and growing.  Marathons go on and on ... or so it seems.  This is just the start.


“The Ixil people of Nebaj, Chajul, Cotzal are here to stand in solidarity with those under State of Siege.” twitter.com/xeni/status/33…
— Xeni Jardin (@xeni) May 7, 2013

The Constitutional Court may have vacated Efraín Ríos Montt’s conviction, but the struggle for justice will continue. And nothing can annul the survivors’ testimony and courage.
Read more: http://www.thenation.com/article/174488/guatemalas-genocide-trial#ixzz2U9r4IIqQ

Fredy Peccerelli: A forensic anthropologist who brings closure for the “disappeared"


Last night, April 16th, the body of Qanjob’al community activist Daniel Pedro Mateo was found murdered in Santa Eulalia, Huehuetenango, Guatemala.   He had been kidnapped for 12 days and his body showed signs of torture.

Daniel, a founder of the community radio station Snuq Jolom Konob, disappeared on Sunday, April 7th  in the village of El Quetzal, Huehuetenango on his way to host a workshop on Indigenous rights in the community of Santa Cruz Barillas. His family was contacted by kidnappers and demanded a ransom of Q150,000 in return for his safety. Despite the efforts of his family and community to gather money to pay the ransom, Daniel’s body was found last night in his village of Santa Eulalia. ...

"Granito: How To Nail A Dictator" theatrical trailer from Skylight Pictures on Vimeo.

It was presented at Wisconsin Film Festival.

Watch When the Mountains Tremble on PBS. See more from POV.

A Motion for Retrial


A Motion for Retrial from Skylight Pictures on Vimeo.


Operation Condor
Posted by Bill Gates at 8:05 AM No comments: