Each of these WI Assembly Reps (Pope, Taylor, Hesselbein) took the time to write independent thoughtful "letters" to explain, largely using objective data, generated by the non-partisan Legislative Fiscal Bureau (LFB) about how "law" changes have really affected Wisconsin and its citizens.

As a disclaimer, you the reader should know, that several decades ago I worked at the LFB.

I may editorialize later but for now ask you to review the "letters" yourself and ask whether you think the consequences are what you like.


Rep. Dianne Hesselbein: The tax giveaway nobody talks about

What hath Walker Reaped ... Why?

I don't doubt plenty of people have trouble, especially in rural areas, paying their property tax bill.  That is a problem the "Homestead Tax Credit" was designed to alleviate in Wisconsin - does it need expansion?  Many rural areas also lack social infrastructure as well as physical infrastructure.

As I understand it the WI Budget, as just passed (9/2017) has further reduced the "Homestead Tax Credit".  The wisdom of the WI Governor and GOP controlled legislature is astounding.  This act so clearly demonstrates the misuse and disconnect that "resentment" hath wrought,

Why would a family with children want to move to or live in a place with no schools and little immediate access to health care.  Why would a retired person want to live there either - they may be stuck and getting to a doctor is really a major problem?  Why would someone growing up there, spending most of their time being bused to school, want to stay there when they can't get a job later; when they can go to a larger community get a job, meet other people their age, and have more of a social life?

Wisconsin Self-Insurance is likely to decimate healthcare alternatives for all citizens in rural areas.

What does Wisconsin Walker/GOP do?  Add cumbersome "Voter ID" requirements in person at DMV offices; while closing many of them and disrupting operations during "advance voting".
If You Think Voter ID Is About Voter Fraud, This Republican Congressman (Grothman) Has News For You


Despite being the world’s leading democracy, much of America’s voting system remains in the dark ages. Many states still use paper-based voter registration. Online registration just started gaining ground a few years ago. And when voters move, they almost always have to re-register every time.
Now, things are about to change.
Last year, Oregon and California enacted new laws to automatically and securely register eligible voters when they apply for or renew a driver’s license at the DMV. Oregon’s law went into effect in January of this year. And after just a few months, it’s already yielding huge results.
Today, the secretary of state announced Oregon has registered 34,410 new voters through the DMV since the law was implemented earlier this year. These numbers, based on 47 business days’ worth of transactions, translate to a monthly rate of 15,375 (a typical month has 21 business days).
How does this compare to past years? As the chart below shows, it’s a huge increase. Here’s a look at the raw numbers: According to information submitted to the Election Assistance Commission, Oregon registered a total of 99,913 voters at the DMV in the 24-month 2012 election cycle and 94,913 in the 2014 cycle. That translates to 4,163 and 3,955 per month, respectively. ...

The new monthly registration rate of 15,375 dwarfs previous rates: So far, Oregon’s 2016 registration rate is 3.7 times higher than it was in 2012, and 3.9 times higher than in 2014. Plus, we could see an even larger boost later this year, when the state implements the “lookback” provision of the law, which will add eligible citizens who visited the DMV in recent years.

...Allbaugh said it was apparent to him and others in the meeting that Lazich and Grothman were referring to making it more difficult for certain demographic groups to vote.

“It was absolutely clear to me,” Allbaugh testified.

Posted by Bill Gates at 4:34 PM No comments:

Computers are so mysterious ... overloads can happen but ... this is what conspiracy theories are made of: DOA Server Issue Causes Temporary GAB Application Outages 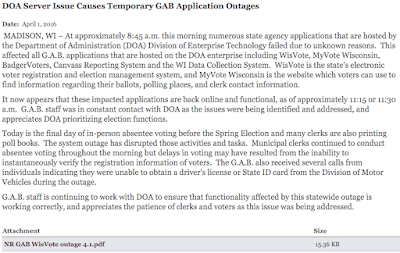 Date:
April 1, 2016
MADISON, WI – At approximately 8:45 a.m. this morning numerous state agency applications that are hosted by the Department of Administration (DOA) Division of Enterprise Technology failed due to unknown reasons.  This affected all G.A.B. applications that are hosted on the DOA enterprise including WisVote, MyVote Wisconsin, BadgerVoters, Canvass Reporting System and the WI Data Collection System.  WisVote is the state’s electronic voter registration and election management system, and MyVote Wisconsin is the website which voters can use to find information regarding their ballots, polling places, and clerk contact information.
It now appears that these impacted applications are back online and functional, as of approximately 11:15 or 11:30 a.m.  G.A.B. staff was in constant contact with DOA as the issues were being identified and addressed, and appreciates DOA prioritizing election functions.
Today is the final day of in-person absentee voting before the Spring Election and many clerks are also printing poll books.  The system outage has disrupted those activities and tasks.  Municipal clerks continued to conduct absentee voting throughout the morning but delays in voting may have resulted from the inability to instantaneously verify the registration information of voters.  The G.A.B. also received several calls from individuals indicating they were unable to obtain a driver’s license or State ID card from the Division of Motor Vehicles during the outage.
G.A.B. staff is continuing to work with DOA to ensure that functionality affected by this statewide outage is working correctly, and appreciates the patience of clerks and voters as this issue was being addressed.