The Mueller Report or "TheGenius President is not above the law and Congress should IMPEACH and remove him from Office."


The Mueller Report or "The President is behaving as if above the law and Congress should IMPEACH and remove him from Office." 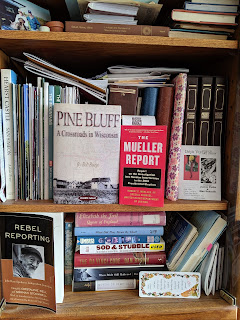 Hope I just don't let it sit there :)

...
In some ways, Mueller’s statement felt out of sync with the current political moment — particularly since it came more than a month after the report was released by Attorney General William Barr and more than two months after Barr’s much-criticized summary initially relayed Mueller’s findings. But now that Mueller has exited the political fray, it’s entirely up to Congress as to what happens next — and many 2020 hopefuls are using it in a new push for impeachment, which could complicate House Speaker Nancy Pelosi’s agenda.


Here are three takeaways from Mueller’s press conference:
Mueller quietly rebuked Barr, repeating that he did not exonerate the president.


Underneath the polite, straightforward summary of his findings, Mueller poked holes in Barr’s presentation of his findings in March. In contrast to Barr, who said he had concluded that there was insufficient evidence to charge President Trump with obstruction of justice, Mueller said that if his team “had had confidence that the president clearly did not commit a crime, we would have said so.”


He added that charging the president with a crime was a non-starter from the beginning, thanks to Department of Justice guidelines that bar prosecutors from indicting a sitting president. But he also stressed that he did believe he had the authority and the obligation to investigate potential obstruction. Barr, meanwhile, suggested in congressional testimony earlier this month that Mueller should not have continued his investigation if he felt he couldn’t make a “traditional prosecutive decision” about whether the evidence supported criminal charges.


Mueller — true to his reputation as a law enforcement veteran who dislikesthe public spotlight — didn’t openly engage with the political theatrics that have consumed his investigation, adding that he “didn’t question [Barr’s] good faith” in choosing to release the report publicly, and stressed that he would have nothing to say to Congress that wasn’t already in the report.

#TheGenius and #Barr are both #Corrupt and should be #Indicted - According to "My Great and Unmatched #Wisdom" - Donald J. #Trump - #GoodCharacter or at best #Hubris ? #Putin his fellow Genius !!

Posted by Bill Gates at 9:04 AM No comments:


KENDALL, Wis. — For decades, Denise and Tom Murray rose before 5 a.m. and shuffled through mud and snow to milk cows on the farm that has been in their family since 1939. This month, after years of falling milk prices and mounting debt, the Murrays sold their last milk cow, taking pictures while holding back tears as the final one was loaded onto a truck and taken away.
“It’s awful hard to see them go out the last time,” said Ms. Murray, 53. “It’s scary because you don’t know what your next paycheck is going to be.”
Wisconsin is known as “America’s Dairyland,” but the milk makers who gave the state its moniker are vanishing, falling prey to a variety of impediments, including President Trump and his global trade war. ....


More than half of the Trump administration’s trade-war aid for farmers went to just one-tenth of the recipients in the program, according to an analysis of payments by an environmental organization.
Eighty-two farming operations received more than $500,000 each through April under the U.S. Agriculture Department’s Market Facilitation Program, according to the Environmental Working Group, which analyzed records it obtained through the Freedom of Information Act covering $8.4 billion in payments.

Especially when the big can lobby for rules and get subsidies that advantage them over the small.


President Donald Trump's agriculture secretary said Tuesday during a stop in Wisconsin that he doesn't know if the family dairy farm can survive as the industry moves toward a factory farm model.
U.S. Agriculture Secretary Sonny Perdue told reporters following an appearance at the World Dairy Expo in Madison that it's getting harder for farmers to get by on milking smaller herds.
"In America, the big get bigger and the small go out," Perdue said. "I don't think in America we, or any small business, we have a guaranteed income or guaranteed profitability."

Walker implicitly organized the "rural" population with gerrymandering to vote for their own demise.  Only solution is for that group to hold their "pols" accountable.

Stung by #Trump ’s Trade #Wars, #Wisconsin ’s Milk #Farmers Face #Extinction - after nearly a decade of #GOP and ExGov- #Walker #Vos #Fitzgerald <- What did the pols do for you? #Perdue is a chicken ... bye bye #USDA
Posted by Bill Gates at 4:27 PM No comments:


Evers said Medicaid expansion is broadly popular, including among many Republicans, and would infuse more than $1.6 billion into the state's healthcare system.
Still, Evers declined to say if he will sign a state budget that excludes Medicaid expansion. GOP leaders of the Legislature's budget-writing committee announced late Wednesday that their first budget move next week will be to strip the proposal and more than 100 others from Evers' budget.