Democurmudgeon blogger John Peterson gives a big "thank you" to Gov. Scott Walker for making Wisconsin No. 49 in the country in internet speed. He mocks Wisconsin media for reporting that Walker says the system is improving and moving forward. Yes, moving forward to second to last in the country, the blogger chides.


~~~~~~~~~~~~~~~~~~~~~
Always -- this is one of those struggles/issues that will not ever go away.  In a market economy we have to be ever vigilant for those that seek personal/corporate advantage that want to create a market society.

Bad news: The House Appropriations Committee just voted for 3 provisions that gut Net Neutrality less than a week after the rules finally went into effect.All of the provisions are poison for Net Neutrality, but the worst would stop the FCC from implementing the rules until after the courts resolve all 10 lawsuits that have been filed against the rules — even though the courts just denied that very same request. That could mean no Net Neutrality for years. 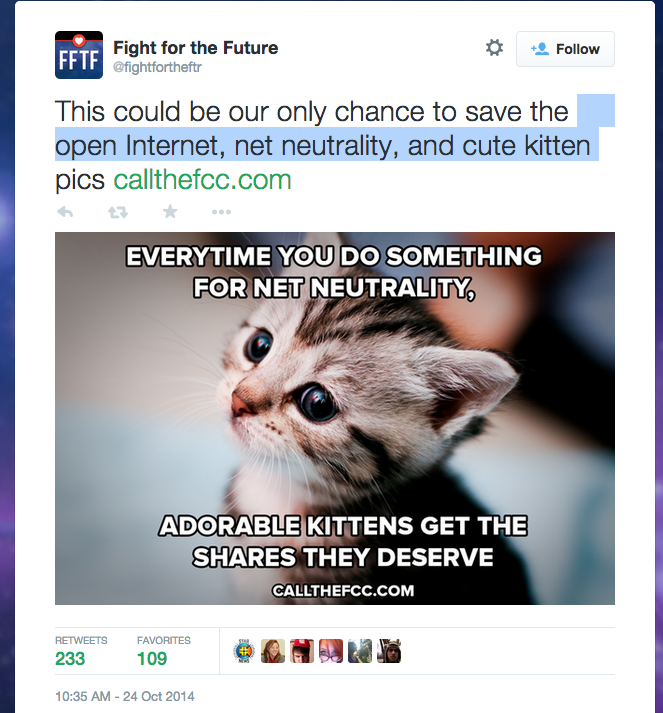 
BILL MOYERS: Welcome. If I told you that sovereign powers were about to put a toll booth on the street that leads from your house to the nearest Interstate, allowing your richest neighbors to buy their way to the open road while you were sent to the slow lane, you would no doubt be outraged. Well, prepare to scream bloody murder, because something like that could be happening to the Internet.

Yes, the Internet -- your Internet. Our Internet. The electronic public square that ostensibly allows everyone an equal chance to be heard. This democratic highway to cyberspace has thrived on the idea of "Net neutrality” -- that the Internet should be available to all without preferential treatment. Without preferential treatment. But Net neutrality is now at risk. And from its supposed guardian, the Federal Communications Commission. The FCC chairman Tom Wheeler is circulating potential new rules that reportedly would allow Internet service providers to charge higher fees for faster access, so the big companies like Verizon and Comcast could hustle more money from those who can afford to buy a place in the fast lane. Everyone else -- nonprofit groups, startups, the smaller, independent content creators, and everyday users – move to the rear. The Net, neutral no more.

The risk is summed up more generally and philosophically ...

Cable companies are trying to create an unequal playing field for internet speeds, but they're doing it so boringly that most news outlets aren't covering it.
John Oliver explains the controversy and lets viewers know how they can voice their displeasure to the FCC.
(  www.fcc.gov/comments , for any interested parties)

We don't need more oligopolies and more inequality!  If things are slow invest in the infrastructure --- not unlike the InterState HighWay system.

Just another front in the Privatization War -


Net Neutrality is Under Attack
Don't let Congress break the Internet by dismantling Net Neutrality — share this video to raise the alarm.Take action here: https://www.battleforthenet.com/?call_tool=1
Posted by Fight For The Future on Tuesday, November 24, 2015

1/24/2017 email extract from <team@fightforthefuture.org> about